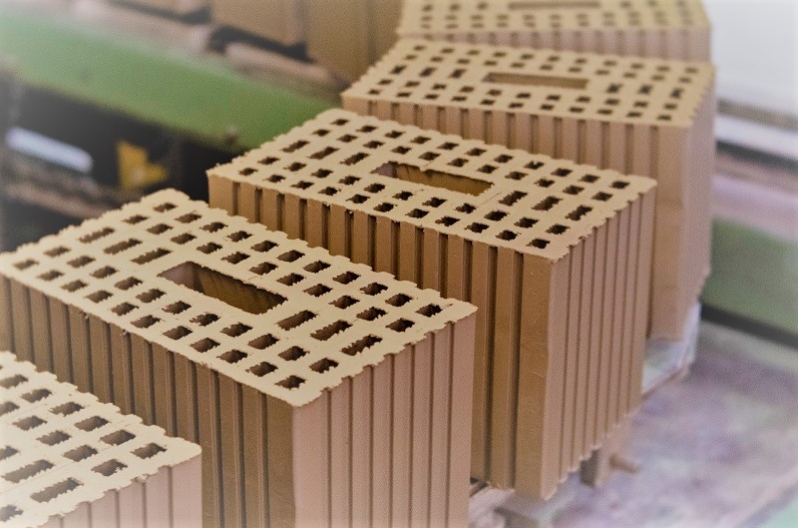 Neat as a pin, each brick on the pallet is identical to the next. Deviations at the building site are accepted only within tight tolerances. Standardized measurements are already in demand simply because bricklayers these days rarely lay the vertically perforated bricks with mortar but glue them together with thin-bed mortar as piece work. Balancing gaps – error reports. And then every deviation from the norm also costs time – which is why manufacturers such as the Swiss brick manufacturer Landquart AG is continuously improving its established production process. To cut off the endless column of clay into individual bricks, the company has now integrated a servomotor driven module.

It is iron compounds which give clay bricks their typically orange-brown color. The precise color that the building materials ultimately take on depends just as much on the minerals contained within the clay as the firing temperature and the prevailing atmosphere in the oven. There are a number of adjustment screws which the manufacturers of so-called coarse-ceramic products can turn so that the construction industry can deliver perfect bricks. In so doing, it is important to observe that a good brick – with all its claims to automation – still takes time. The most important components of brick are loam, clays and marl.

Cut clean from the endless column

The brick manufacturer Landquart from the place of the same name in the canton of Graubünden extracts the clay from its own clay pit. "Before it is shaped, the ingredients need to be well mixed and, with a view to a homogeneous distribution of moisture, temporarily stored for days. Only then can the paste go into the extruder which compacts the mineral mixture and presses it through its mouthpiece. This creates an endless brick with a fixed length and width. The height is achieved from the speed at which the cutter from the Swiss company Freymatic AG works,” explains Daniel Bärtsch, Plant Manager at the Landquart AG brickworks. 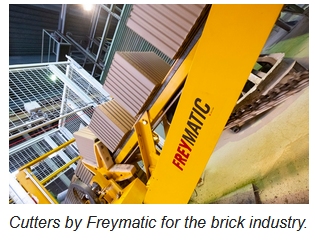 Characteristic for the cut is the combination of the continuous feed of the clay column from the extruder and the discontinuous cutting. To do this, it takes the basic drive arrangement of the flying saw – in essence designed like a thin steel wire which runs from top to bottom through the soft clay columns like a harp string in time with the band speed. The cutter by Freymatic is at the same time cyclically positioned by a Thomson linear axis and synchronized with the band speed. To drive the linear unit with its interior ball screw, TBM Automation AG opts for synchronous servo motors in the AKM series by KOLLMORGEN. TBM and Freymatic have fostered a trusting collaboration for many years in matters of drive technology, motion control and automation. "We need to understand the processes, know how our customers think and then learn about the intricacies from our growing experience,” says Silverster Tribus, Managing Director at TBM. The Swiss engineering specialists from Widnau have on their part been cooperating closely with KOLLMORGEN as a certified partner.

Drive simulation from the workstation

In the past, the vast majority of functions needed to be constantly re-programmed – and a huge amount of code needed to be written for this. "These days, we pull our prepared blocks into a motion project – and that's it.” In conjunction with graphic programming, the on-site engineers can see considerably better "what impact each of the changing parameters has”. The basis for this unerring and efficient way of working is created by the Kollmorgen Automation Suite – above all in the design of the pipe network contained within.

Pipe Network clearly and precisely replicates the machine architecture including the dependencies between the axes of an application in a very short space of time. The otherwise very complex programming in Pipe Network is replaced by a graphic description with drag-and-drop function. Starting from a virtual master, all functions and relationships between components as well as all movements and settings can be defined with graphic description blocks. If the system is available, the Kollmorgen Automation Suite also offers the opportunity for virtual simulation. Movement profiles, axis conditions or synchronizations can be optimized in real time without the need to connect a single device.

"This is a real advantage because we can test the axes in the office and initiate start up with a prepared, fault-free application,” stresses Danijel Todorovic-Grabher, Senior project manager at TBM Automation. If adjustments need to be made on site, there is a KOLLMORGEN touch panel at the ready right by the system in the brickworks. "We can simply leaf through the drives and don't need an additional laptop on site.”

The user-dependent access for this in the first step is carried out on the freely programmable controls in the IEC 61131-3 languages. It is part of the functional scope of the KOLLMORGEN Motion Controller PCMM. The compact device takes on the sequential control and the motion control of the connected AKD servo drives with the AKM synchronous servo motors. Motion Control has designed TBM in such a sophisticated way that the machine actually removes the bricks from the column with the beautifully soft motion task profiles. At the Landquart brickworks, the unit is placed directly between the formed part of the extruder and the discharge conveyor. The high overload capacity of the AKM motors up to five times the nominal current ensures that, during operation, the sudden occurrence of speed fluctuations does not lead to a fault in the cutting process. Changed requirements in power are not a rarity in the brick industry; they actually happen on a regular basis. After all, it's a natural product with a fluctuating consistency that is processed into bricks fully automatically.

Against this background, it is also common practice to regularly optimize the settings of the cutting unit. The water in the clay alone or the detailed changing composition of minerals changes the mechanical shaping of the brick which is still highly sensitive after extrusion. The motion control for taking the cut raw bricks away for drying is configured in a similarly challenging way. Days later, it then goes into the oven for several hours.

For the flow of materials, Freymatic also opts for servo axes by Kollmorgen which are coordinated alongside the multi-axis arrangements of the PCMM. From the viewpoint of motion control, this process is characterized by exactly managed acceleration and braking profiles which transport off and therefore separate the bricks during production. Integrated into the automation is the pallet loader which pushes metal profiles from a magazine under the bricks for their further transportation.

This is what good clay needs

A view into the clay industry shows how existing systems have allowed themselves to become efficiently modernized when machine engineers, system integrators and drive manufacturers work closely together.

"We present data about what quantity needs to be shifted and what times and accuracy are required,” says Marco Breitenmoser, head of construction at Freymatic. "TBM then uses this as a basis to make proposals.” Good clay has for many years relied on the cooperation between Freymatic and TBM discussing jobs together and then also finding the best solution together. "Our expertise lies predominantly in the machine concept and TBM's is in the drive technology and automation,” says Marco Breitenmoser in summary.

Disclaimer
The use of this news article and images came with permission from Kollmorgen.