Freymatic is building shot peening plants for the construction of aircraft engines – and, to do this, it's opting for Motion Control by KOLLMORGEN to achieve high quality requirements 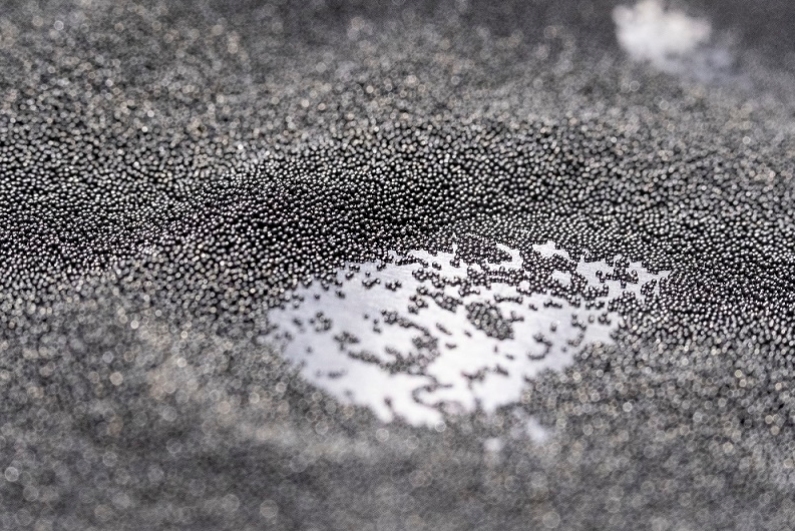 The shot needs to hit accurately. This is the only way for their power to be optimally deployed. This power does not do any damage. In fact, with each hit it makes the target stronger, more solid and tougher. And this is why accuracy, air speed and the right quantity with the right measurements are so crucial. Freymatic AG from Switzerland builds shot peening systems which extend the life of heavy-duty components including those in aircraft technology. To do this, the process, similar to a blacksmith's hammer, produces precise compression stress on the surface. Motion Control by Kollmorgen ensures that sufficient shot reaches the target – the single cable connection technology saves valuable installation time.

"When we have a breakdown, we can't just pull over.” Those in the know describe in one sentence the safety thinking in aviation. Anyone with a broken drive shaft managing to end up relatively unscathed with their vehicle in a field or ditch would have much further to fall if they were in a similar disaster while in the air. In the face of the serious consequences of technical faults in civil aviation, all parts of an aircraft are supplied with an abundance of safety margins. One way to make heavy-duty components even tougher against the prevailing powers is using shot peening. This process is used mainly in the construction of engines.

A chain mail made of tension forces

Using pressure, the drag is able to resist a potent force. Figuratively speaking, components are placed into chain mail. The links in the chain mail consist of compression stress which the shot peen with their kinetic energy during impact with the atomic lattice. Fatigue damages only become clear later on. "Fissures in the material occur where tensile stress is prevalent,” explains Martin Hunziker, CEO of Freymatic. The connection between tensile forces and the formation of fissures is particularly critical in the construction of aircraft since it is here that lightweight construction is required. Despite their size, the blades in an engine need to be very light. This is why they are made of a titanium alloy. The next generation of engines will be even lighter – amongst other things due to the use of titanium-based compounds. But in automotive construction, too, the process is an established manufacturing practice – specifically where fatigue resistance is required.

When it comes to shot peening, manufacturers often use Roxor systems by the Swiss firm Freymatic AG. To do this, the system builders from Domat-Ems in the canton of Graubünden place an industrial robot into a hermetically sealed chamber and fully automatically equip its wrist with up to six different spray nozzles via a mechanical exchange during the machining job. While the robot takes on the motion control along the components being blasted inside the soundproofed chamber, the pressure supply and dosage unit remain outside. The shot quantities can be selected anywhere between 1 and 10, thus achieving control deviations below three percent. This precision is necessary since it is not possible to carry out inline quality monitoring for shot peening – at least not without destroying the tool. The system operator must therefore be able to rely on the adherence to process parameters – which is why, in the field of servomotor driven dosage units, maximum precision and repeat accuracy is required. This range is achieved with a speed-controlled worm gear. The conveying screw is driven by synchronous servomotors from the KOLLMORGEN AKM series which in single cable connection technology are combined with their own AKD servo inverters.

The connection between the servo drive and the servo motor using just one cable is also an advantage for this application since the systems can be wired up more quickly while also saving space. This is because the cable typically used for feedback signals is not required. 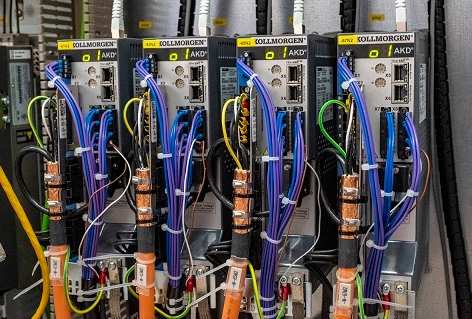 KOLLMORGEN opts here for a slender hybrid cable for motor and feedback.

What is special about it: The single cable connection technology works even without laborious and expensive multiturn encoders. The specialists in Motion Control and servo drive technology have developed the digital resolver SFD3 for this. The interface translates the analog data of the resolver into one digital signal which it then transfers via one cable to the drives.

Tight tolerances in the dosage

Back to the peening system by Freymatic: In terms of construction, this consists of two pressure containers which act as a sluice between the unpressurized blasting shot store and the dosage which is under high pressure. The dosage powered by the AKM servomotors in the single-cable version represents a core function of the Roxor systems and, when operational, delivers shot quantities of between 0.1 and 12 kilograms per minute with an accuracy of /- 5 percent. In the mixing tube and up to the spray nozzle, the shot is accelerated up to the exit speed. This speed forms the two significant process parameters and is indirectly regulated via the spray pressure in a tight window of tolerance. The pressure thus lies between one and seven bar.

Accompanying the high adjustment range in the drive control designed by TBM Automation is above all the challenge of being both delicate and fast. To do this, the drive axles regulate the speed of the dosing screw via the signals from throughput sensors. "If there is too much material, the speed drops and vice versa,” explains Silvester Tribus, managing director of TBM Automation AG. The company from Widnau, south of Lake Constance, has been working closely with Freymatic for some time already as a system integrator. The specialists in Motion Control and servo drive technology belong to the group of certified system and distribution partners of KOLLMORGEN with highly specialized engineering competence.

To ensure that the adjustment is carried out swiftly and precisely, Urs Tobler, from the TBM management team and specializing in control technology in blasting systems, has equipped the Motion Control with a few special features. "After all, we want the system to start up quickly and need a correspondingly short amount of time until the quantity and pressure have precisely engaged.” Urs Tobler looks back to make a comparison with a time when dosage drives were still driven by DC motors which were hard to regulate, especially with small quantities, and only delivered reliable values in the upper speed range. With an additional linearization of the control performance with analog values, using the KOLLMORGEN AKM motors, it has now been possible to "be precise even from zero speed upwards.” This control quality is said to make the process reliable across the entire adjustment range. This aspect is particularly relevant for shot peening since, after peening, it is not possible to carry out a quality analysis without damaging components.

Shot firing which is too low also results in poor values, following the motto "more is more”. To determine where the optimum value lies, system operators can only do this with "Almen strips”, thus measuring the effect of the shot impact by the distortion of a standardized surface. The Almen values determined by the distortion of a metal measurement strip then provide conclusions as to the effectiveness of the process. This must later precisely and continuously follow the previously determined key values so that the desired effects of the compression stress is set. In a further consequence, this process only functions in conjunction with regular calibration.

The complex processes in the mechanical strengthening of metal components using shot peening shows what a significant role the precise and, above all, repeat accurate servo drive technology plays. The automation conceived by TBM Automation AG for Freymatic AG is also set up in a user-friendly way for the operator and offers a cleanly structured visualization.

Disclaimer
The use of this news article and images came with permission from Kollmorgen.